Electro sensors inspired by fish who navigate their way through murky waters, robots that dance with the honeybees, and artificial muscles and blood vessels making their way into modern medicine. These are just a few of the research topics that were discussed at this year’s Living Machines Conference that took place from 9th to the 12th of July in Barcelona, Spain.

Chairs of the session  Paul Verschure, from Pompeu Fabra University and Tony Prescott from the University of Sheffield, welcomed delegates to one of Barcelona’s architectural gems; Antoni Gaudí’s La Pedrera building.

During 4 consecutive days, leading scientists in the fields of Biomimetics and Biohybryd systems gathered for pre-conference workshops, lectures, poster sessions, exhibitions and open panel sessions to present their work and discuss issues related to the development of real-word technologies inspired by biological systems.

The first day finished off with a panel-lead discussion centred on the question: why study nature? Co-chair Tony Prescott got dialogue flowing by providing two general reasons: to build technologies that could be useful in solving current challenges, and to better understand nature itself.  While the speakers and audience engaged in the discussion agreed that these are likely the main motives, other interesting opinions surged through out the conversation. 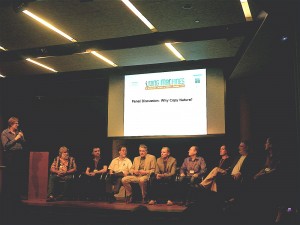 According to Barry Trimmer who specializes in Neurobiology at the University of Tufts,  by attempting to understand nature’s complexity, a biomimetic approach may allow us to bypass the limits of human creativity.

Toshio Fukuda who specializes in Micro-Nano Systems Engineering at Nagoya University is often inspired by particular functions or geometric shapes found in nature to help make devices such as the artificial blood vessels he works on more efficient.

Conversely, as a mechanical engineer specialized in aerodynamics, David Lentink  is not so much interested in biomimetics as an outfit for a design, but rather in specific principles which might make sense from an engineering point of view ¨ We don’t want to look at the final detail of a bird wing to make an aircraft because it’s simply too complex, but some of the principles are extremely useful and they allow scientists to really think outside the box.¨

While a biomimetic approach often involves studying some of the most puzzling aspects of nature scientists have yet to wrap their heads around, there are still many things nature can’t do. ¨ Biological systems satisfy many constraints at one time so they may not be optimal for any one function that we may want to imitate. Flight is a great example because we can do things by optimizing that birds just can’t do and we can exceed the capabilities of birds with jets and planes that we build,¨explained Frank Grasso, director of the Biomimetic and Cognitive Robotics lab at Brooklyn College, New York. 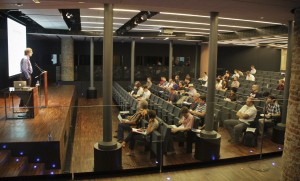 However, Dieter Braun, who specializes in Systems Biophysics at Ludwig Maximilians University, pointed out that it’s really a two-way learning stream and just because ¨evolution did not invent the bicycle¨ nature still has plenty of tricks to teach us and we need not be afraid of its complexity.

Check back to find out more on what what was shared during the 2012 Living Machines Conference; proceedings from the conference will be published in Springer Lecture Notes in Computer Science (LNAI/LNCS).