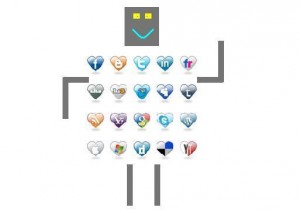 Twitter has reached over 500 million users, but of those, apparently only 140 million actually use it regularly. Now it turns out that some of these users may not even be real people, but robots instead!

A study by Marco Camisani Calzolari, a  professor in Corporate Communication and Digital Languages at The  IULM University of Milan, recently carried out a study that analysed the profiles of users who followed companies with a strong presence on Twitter.

A forensic software program was used to identify profiles which diverged from normal human behaviour on social networks, but when it comes to use of social networks, it’s hard to say what should be considered ¨normal¨ or human.

For starters, not every Twitter user who failed to post an update every 5 minutes was automatically deemed a robot. Instead, two of the most important elements in gauging a user’s humanness were whether or not some of the user’s tweets had ever been re-tweeted and whether or not the user had logged in through more than one client or through a mobile device. Apparently robots don’t often  say things worth repeating, nor are they likely to own an iPhone.

Calzolari’s report concludes that among some of the companies he analysed, nearly half their Twitter followers are actually robots! However, as Calzolari explains in a recent article the companies themselves may not be directly at fault for their phony followers: “In some cases, the web agency or media centre executives have chosen to take short cuts in order to demonstrate to companies, who are oblivious, that their activities have been successful by generating lots of new users”.

Now these days, robots aren’t just on Twitter. In fact, a new social network is aiming to be the ¨Facebook for robots,¨ because robots should be able to post photos of their latest vacations too. Alright, we’re kidding, but the company Robot Shop is dead serious about their robot connecting network, MyRobots.

The network aims to connect all robots and intelligent devices to the internet, enabling them to  do more by allowing them to be remotely  monitored and controlled. As explained on the MyRobots website,¨In the same way humans benefit from socializing, collaborating and sharing, robots can benefit from those interactions too by sharing their sensor information giving insight on their perspective of their current state.¨ To help describe their concept, MyRobots has posted a link to the video below produced by Ericsson.