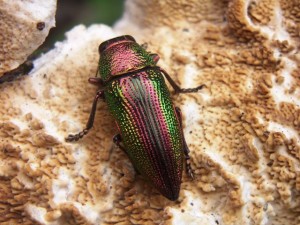 The Jewel beetle may be able to detect forest fires up to 80km away… could they help humans do the same?

Judging by their glamorous iridescent colouring, you could never tell that a Jewel beetle’s preferred hang out is among heaps of ashes and soot. In fact, females within this family of beetles will search far and wide for the comforting branches of a smouldering tree; making forest fires the best time to hunt for new real estate when they’re looking for a spot to settle their young.

Because most other insects tend to avoid recently scorched wood,  jewel beetle larvae can develop there free of competition and menace from other species. How does a mother beetle find these hot spots? Embedded into her belly,  a set of special organs  act as her very own infrared sensors. Interestingly enough, ¨the jewel beetle’s cuticula is particularly good at absorbing thermal radiation with a wavelength of about three micrometers—exactly the radiation that is typically emitted by a fierce forest fire,¨explains University of Bonn zoologist Dr. Helmut Schmitz.

Along with PhD student Martin Müller, Schmitz has referred to the physiology of the Jewel beetle to create an infrared sensor out of  very simple and inexpensive components. While  Schmitz maintains that commercial infrared sensors still perform significantly better, this prototype marks the beginning of an initiative to develop sensors that are more sensitive and less expensive to manufacture.

While infrared-sensing animals are rare, researchers plan to take a look at other beetle and snake species that exhibit this same gift.  Shultz explains: “Our aim is to test all known infrared-sensitive animals to find out how sensitive their sense of thermal radiation is”.  Since last year, Dr. Guido Westhoff has been collaborating with Schmitz and Müller by examining the heat sense of reptiles in a project funded by the Deutsche Forschungsgemeinschaft (DFG). Together, the team will further explore  infrared sensing in animals, hoping to develop technology that will allow us to tackle forest fires faster.