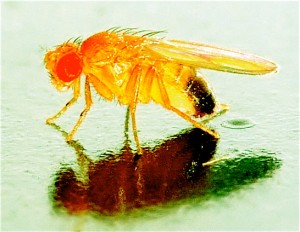 A new way to get meaningful info from minute creatures

Although not known for its beauty or its brains, the common fruit fly has won the devotion of scientists around the world thanks to its many traits that make it an excellent research subject.

The Drosophila melanogaster is already well known for being used in genetics research – in fact, these little guys can even provide us with important insights into the brain mechanisms underlying cognitive processes like learning and memory.

It has become increasingly popular to study the fruit flies’ olfactory system. By manipulating the genes of these flies, we can learn more about how odors are perceived by the brain and even how they can influence behaviour.

However, this type of research can be tricky business.  Currently, olfactory driven fly
behavior is mostly investigated in mass experiments using  apparatus such as the T-maze, where large groups of flies are asked to choose between one odorant and a control. For a variety of validity issues, using this kind of methodology  often produces biased results while also leaving researchers short of finding the data they are really looking for.

To remedy these issues, researchers from The Max Planck Institute for Chemical Ecology, in Germany; The Madeira Interactive Technologies Institute and The Sythetic, Perceptive, Emotive and Cognitive Systems group (SPECS), University Pompeu Fabra, in Spain, have created a new model to study olfaction in the fruit fly…. While the latest fashions grab attention on the Catwalk, researchers working with fruit flies may start turning their heads towards the Flywalk!

The Flywalk consists fifteen small aligned wind tunnels where individual flies can be exposed to repeated odor pulses, well defined in concentration and timing. The flies’ positions can also be visually tracked, which allows quantification of the odor-evoked walking behavior with high temporal resolution.

By using the Flywalk, researchers were able to show that the flies’ behavior is odorant-specific; attractive odors elicited upwind movements, while repellent odors evoked downwind movements. Furthermore, researchers were able to demonstrate that these changes in behavior differ between sexes and that flies can evaluate the sex of others around them and males can even determine a female’s mating status based on olfactory cues.

If you’d like to find out more about this, you can access the full paper published in Nature.