The Brain, Music and Artificial Intelligence

The SPECS lab puts their stuff on display in Barcelona!

The Spanish Society of Neuroscience, has declared 2012 Neuroscience Year in Spain. The year-long celebration serves as a way to bring neuroscience to the public and promote the dissemination of scientific knowledge ; a series of exhibitions, conferences, and a variety of other events have been taking place around the country throughout the year.

Here’s a taste of what was featured last month at the Fabra y Coats creation space in Barcelona, Spain– members of the Synthetic Perceptive Emotive and Cognitive Systems Lab (SPECS)  from Universitat Pompeu Fabra  displayed some of their latest innovations and talked about their recent work: 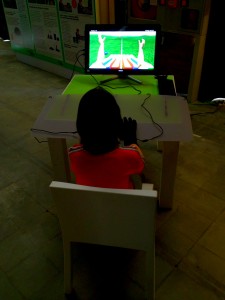 Trying out the RGS

What if we could replace parts of the brain damaged by diseases such as Parkinson’s or Alzheimer’s? A talk by Ivan Herreros introduced the audience to the rapidly advancing world of neuroprosthetics.

Later on, Armin Duff talked about plasticity and the brain  followed by Belén Rubio Ballester who explained how the Rehabilitation Gaming System (RGS) is used with stroke patients.  Visitors were busy trying it out all day! 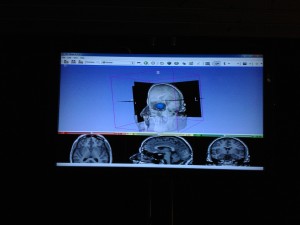 Crowds were also intrigued by some new  interactive software capable of displaying 3D images of the brain. Pedro Omedas and Alberto Betella were there to explain it and give people a go at trying it out for themselves.

The ¨emotion machine¨caught the eye of many passers by: Sylvain Legroux and Fabio Rotondi were present to help participants experience personalized multimedia through a multimodal system that can detect responses from physiological and behavioral measures while being linked to musical instruments and  a real-time graphics system called SMuSe composition.

Fotios Balampanis with a flying robot

Of course, few SPECS demos would be complete without robots! A chemical sensing robot roamed around the ground while a flying saucer-like bot took visitors by surprise as it hovered in mid air.

The evening session drew a large crowd, featuring talks by leading scientists in the field, Paul Verschure, director of the SPECS Lab at the Universitat Pompeu Fabra  and Robert Zatorre, director of the The Auditory Cognitive Neuroscience Lab at McGill University in Montreal, Canada.

The audience was given an idea of how long musical instruments have been a part of human culture when they were shown a collection of 35,000 year old flutes fashioned out of vulture bones.

Robert Zatorre discussed some of the effects that Music has on the human brain… does it act somewhat like a drug? And, why does it make us want to dance?  Paul Verschure then lead the audience to ponder the concept of creating music without instruments… music created directly through our brains.

One Response to The Brain, Music and Artificial Intelligence