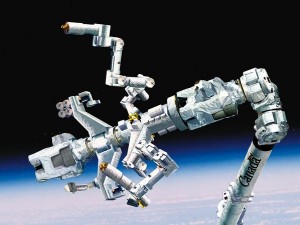 This bot is practicing its satellite-fixing skills in space
According to an article in CNET News, there are over 200 decommissioned satellites orbiting the planet. The majority of these expensive tools are eventually destined to become  orbiting piles of junk  if they break or simply run out fuel.
Since they’re more than just a hop, skip and jump away from earth, sending humans up there to fix and refuel them is no easy task.

Guided by ground staff at Canadian Space Agency (CSA) and NASA centres, Dextre practiced some very fine-tuned skills with a mock satellite at the International Space Station. Some of the robot’s movements are so precise, CSA president, Steve MaClean said  “it’s the robotic equivalent of threading a needle while standing on the end of a diving board”.

During the 3 day trial up in zero gravity, the robot was able to retrieve tools and release launch locks on the pseudo satellite and later this summer Dextre will go on to transfer fuel to it.  If all goes well, researchers hope the robot will be able to refuel real satellites by spring of 2013.

This entry was posted in Robots and Research, Robots Around the World and tagged Canadian Space Agency, Dextre, NASA, Robot Companions. Bookmark the permalink.