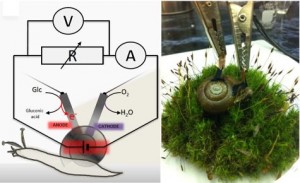 Snails team up with biofuel cells to make electricity

Sugar is what provides  energy for many animals but what if it could provide something more?

Biofuel cells are capable of converting chemical energy into electrical energy. Along with his team at Clarkson University in Potsdam, USA,  Evgeny Katz has wired up some snails so that glucose will give them more than a sugar rush… their implanted biofuel cells now allow them to produce up to 7.45 microwatts of electricity.

Snails aren’t the only animals that have been teamed up with biofuel cells.  Other research has involved using cockroaches , rats and even grapes to produce electricity in this way. Since snails are relatively small creatures, naturally there’s a limit to how much electricity they’re capable of producing. Katz and his team have stated that they intend to try a similar process with lobsters in the near future.

What’s the point of powering up these plants and critters? While these biofuel cells are too small to power large devices, they’re capable of providing electricity over long periods of time in way that’s 100% sustainable. As mentioned in a previous post, NASA recently developed  a small space robot powered by microbial fuel cell (MFC) technology. Whereby electricity is generated by the metabolic processes of bacteria. Applications  for biofuel cells may eventually include self-powered pace makers as well as other implanted medical devices.

While sealed batteries are still an adequate power source for pace makers, they don’t tend to be useful in more complicated applications. For this reason,  Philippe Cinquin and his team at the Joseph Fourier University in Grenoble, France are exploring the use of biofuel cells in rats to produce power that would be compatible with the requirements of pacemakers and other artificial organs such as:  pancreas, urinary sphincters and kidneys.

For more information about these Cyborg snails and other electric creatures check out an article featured in this month’s Nature. You can also learn more about biofuel cells from Philippe Cinquin in a video from the BBC below.

One Response to Cyborg Snails