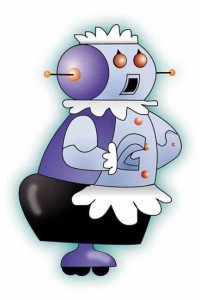 Furthermore, the survey indicated that nearly half of that 68% would even take out a loan to buy one in the future!

If you had a robot at home, what are some of the tasks you would have it do? Participants of the survey stated that help moving heavy objects was at the top of the list. Other robot-worthy tasks included  providing home security,  cleaning windows, washing floors and dishes and doing laundry.
Some envisioned a domestic bot a bit more like a personal assistant; something to remind them about errands and meetings.

Now that we have an idea of what some want domestic robots to do, what do people want them to be like? According to the same survey, a robot’s voice should be rather neutral, not sounding either too masculine or feminine; they should  be round and colourful as opposed to metallic and square and there was also interest in allowing for a certain degree of personal design for domestic robots, similar to how select a certain model of a car.

This entry was posted in Robots and Society and tagged Domestic Robots, Robot Companions. Bookmark the permalink.

One Response to Demand for Domestic Bots