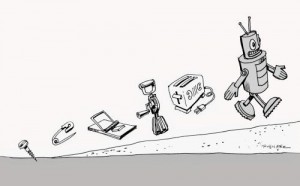 Is it about robot evolution?

Robots have been transforming industries for years. In fact, it seems fair to say that the robot revolution happened a few decades ago and now we’re onto the sequel.

Time magazine featured a  cover story titled The Robot Revolution in 1980.
The eleven page article focused on the major increase of robots used for production purposes across industries all over the world. At that time,  it was only natural that the design of robots corresponded to their function;  ¨It is perfectly possible to design a robot that walks on artificial legs or speaks fluent English, but it is much cheaper and more efficient to keep the robot standing in one place and to speak to it in the soothing language of algorithms,¨  stated David Nitzan of SRI International  in the 1980 article.

Although just over 30 years have past, today’s robotocists are focused on developing robots that go far beyond yesterday’s rudimentary designs because instead of being about getting more robots onto factory lines, today’s robot revolution is  about bringing them into our homes and personal lives.

A recent article in the BBC, Ready for the Robot Revolution, discusses the ways that robots are being developed to help us both at societal and personal levels. The article also points out that what researchers are really starting to consider now is that robots can communicate with humans in ways that other technology cannot. This being the case, scientists are focusing on the finer details of robot behaviour, considering things like eye contact and personal space which are important aspects of human social interaction.

So what is today’s robot revolution really about? Many leading roboticists think that robots could have applications in areas where social support is important; education, learning, and healthcare.  However, their intention is not to have robots replace humans but rather support them by helping them avoid burnout.

The US government is 100% behind the robot revolution.  ¨President Obama’s National Robotics Initiative will lead to new innovative technologies that will invigorate America’s manufacturing economy by creating new opportunities and new jobs, improve our quality of life by revolutionizing health care and medicine, and make our nation safer with the development of robots for defense, security and emergency response,” says Vijay Kumar, professor of Engineering  at the University of  Pennsylvania.

The US. government is not the only one funding this revolution,  in fact The European Commission spent 536 M€ in the past 5 years for cognitive and robotics related research, bringing it into a leadership position.  You can find out more about robotics funding in Europe HERE

One Response to The Robot Revolution…