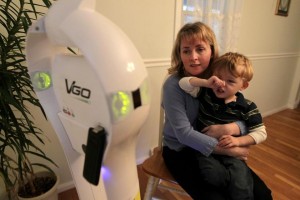 Robots are out of the operating room and at patients’ bedsides!

Robots that perform surgery have been around for a while. The da Vinci system, which has been in use since the 90s, electronically translates a surgeon’s hand movement into much smaller movements which can manipulate the tiny instruments used for the surgery. In this same manner the system also detects and eliminates any natural tremors in the surgeon’s movement .

The smaller and more precise incisions that are realized by robotic surgery allow for faster and less painful recovery of patients. These types of robots have reduced expenditures  in many ways,  nevertheless,  the growing strain on healthcare systems of nations around the world requires governments to look for more ways to cut costs often resulting in a reduction of valuable services.

Lengthy hospital stays are costly and often very uncomfortable, particularly for young patients. The Children’s Hospital in Boston is carrying out a 5 robot pilot program where robots are sent home with a child after surgery to deliver extra care. Instead of having to drive into major cities to see specialists several times a week, patients are able to stay at home while communicating with their doctors and nurses at the hospital via the robot. The robot is also capable of taking detailed pictures of post-surgery scars, sending them to back to the hospital for revision. Dr. Hiep T. Nguyen, director of the Children’s Hospital’s Robotic Surgery Research and Training Center thinks that robots like this could eventually replace hospital monitoring with home-based monitoring.

The hospital’s using robots in other areas too; the hospital’s food service team has welcomed six new robotic members. Using a detailed map of the hospital and navigation software that can plan routes and avoid obstacles, these bots are there to give staff a hand. “Our employees sometimes go up and down from the Cafe to patient floors 10 times during one meal,” stated Cathy Hudson, director of operations in Food Services ¨“Robots can relieve so much of the wear and tear on our people”.

You can read more about the hospital’s use of robots in the Boston Globe. Similarly, Hospital San Raffaelle in Milan, Italy has recently been involved in the European project  ALIZ-E. This project is testing the use of  social robots in the hospital care of children with metabolic disorders.