Welcome to a Robot-Lover’s Paradise 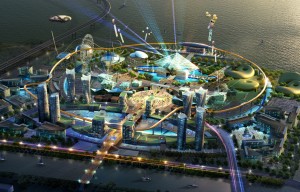 Robot Land is scheduled to open in 2014  in Incheon, South Korea

South Korea’s  got robots covered; from classrooms to the Northern border, the nation’s using robots to support humans just about anywhere.   But their robots aren’t all work and no play; Robot Land’s creators aim to foster ¨robot culture¨ bringing its visitors
¨fun and fantasy with robots¨.

Stationed in the municipality of Incheon, the theme park lies minutes away from an international airport and about 30 km from Seoul, the country’s massive capital city. Plans to develop the theme park have been in progress since 2007 and it is  estimated to attract about 3 million visitors a year upon its completion in 2014.

What kinds of wonders await the future patrons of Robot Land? Everything from aquariums, roller coasters and water parks to a robot food court where robots act as waiters and cashiers. Nevertheless, Robot Land is about more than just robot-themed entertainment. Including both a museum and a robotics research centre, Robot Land’s creators aim to educate the public about robotics while promoting it as an industry.