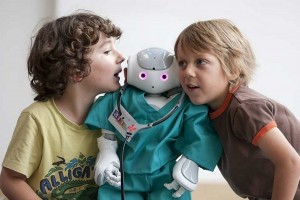 The European project ALIZ-E began in the spring of 2010 and is scheduled to run for another 3 years with 8.29M€ in funding.

The goal of the project is to determine
how human-robot interactions can be improved in order to foster  beneficial long-term  bonds between robots and their users. The project is exploring this by using social robots as dynamic assistants in the care of children with metabolic disorders; diabetes and obesity. Researchers from 9 different European institutions are using the small Aldebaran Nao humanoid robot as their test platform  at the Hospital San Raffaelle in Milan, Italy.

The team believes that long-term human-robot interaction may only be achieved by focusing on the four following  research threads: adaptive memory for long-term interaction, adaptive user and task modeling, adaptive non-linguistic behaviour, and  adaptive linguistic interaction. This means that robots will need to have  some capacity for memory in order to maintain pertinent information about the user and the context, and be able to adapt their physical and verbal behaviours to their users and contexts as well.

These types of robots would be able  to involve a child in a game to prevent anxiety in a hospital environment while being aware of the child’s mood,  capable of switching to  another game if the child were to lose interest.  The robot could also teach the child  a dance to promote physical activity while assessing  the child’s progress in learning the sequence of moves, repeating the sequences and motivating them as needed.

Currently, the project is continuing to  develop the theory and practice behind embodied cognitive robots in the hopes that it will lead to the development of educational companion robots for child users.  The Flagship Initiative Robot Companions for Citizens is another European funded initiative supported by Alderaban robotics, which believes in the importance of developing future robots designed for long-term human-robot interaction. Find out more HERE.

This entry was posted in Europe, Robots and Health, Robots and Research, Robots and Society, Robots Around the World and tagged Adabaran Nao, ALIZ-E, healthcare, pediatrics, Robot Companions, social robots. Bookmark the permalink.

One Response to Pals in Pediatrics