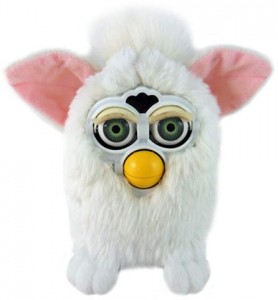 This episode of the radiolab podcast titled Furbidden Knowledge, features an interview with Freedom Baird a former graduate student at the MIT media lab. During the episode, Baird and hosts perform a so called ¨emotional turing test¨ on a group of 7 and 8 year olds. Presenting the children with a Barbie doll, a Furby and a real hamster, they take a look at how long the children are comfortable holding each one upside down.

While the children had no problem holding the Barbie doll upside down for an unlimited amount of time, and immediately felt very guilty holding the hamster upside down for just a few seconds, their interaction with the Furby was much more complicated… although they knew the Furby was just a toy they still felt a strange sort of guilt listening to it protest as they held it on its head.

The podcast also features some of MIT professor Sherry Turkle’s views on these issues as she discusses how machines are capable of pushing our ¨Darwinian buttons¨and Furby’s  creator  Caleb Chung  shares his views on what elements are necessary to foster long-term bonds between humans and machines.