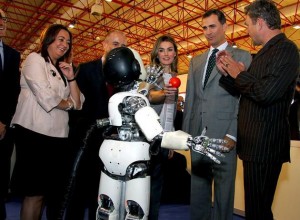 The event is being celebrated from the 12th -26th of October to mark the  the millennium of the Kingdom of Granada. With over 600 experts  from 22 countries of the
Mediterranean basin, the event is a unique international experience
that is focused on highlighting  emerging talent and innovation within Mediterranean countries  and the important role of ICT towards sustainable economic development. The event also aims to foster  international cooperation, respect for human rights, and the overcoming of cultural barriers.

What does icub have to do with this?  icub was present with Paul Verschure from the SPECS lab (Synthetic Perceptive, Emotive and Cognitive Systems) at the Universidad Pompeu Fabra, Barcelona.The SPECS lab is involved in several European projects that are currently using the icub and other robots as a platform to study the mind and brain. Verschure and icub were also there to present the FET Flagship initiative Robot Companions for Citizens, an ambitious initiative which aims to promote our sustainable welfare through the creation of sentient machines.

Check out the links on some of the other European projects SPECS is involved in:

SMCS Extending Sensorimotor Contingencies to Cognition: a project that aims to establish computational models  as controllers for autonomous robots and investigate learning and adaptivity in in artificial systems

GOAL-LEADERS Goal-directed, Adaptive Builder Robots: a project which aims to develop biologically-governed  frameworks for the next generation of adaptive service robots.