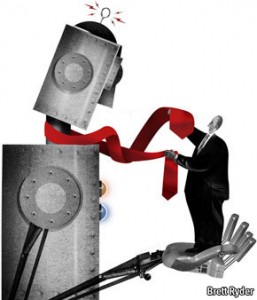 Instead of stealing our jobs, robots might keep them around and even make them easier

Robots are becoming more intelligent at the same time as they’re becoming more affordable. An article in The Economist discusses the need for executives of large companies to start considering the management of robots and other non-human resources.

With a struggling global economy, job availability is an overwhelmingly serious concern world-wide.
A 2009 article in The Atlantic points out that contrary to the European industrial revolution, where an artisan class was transformed into a low-skill yet highly productive class, today’s low-skilled labor employees are now being replaced by machines.

However, the recent article in The Economist suggests that robots could play a big part of a a management revolution “making robots behave like humans rather than the 20th century’s preferred option, making humans behave like robots”. The article goes on to suggest that in the developed world, robots can actually help preserve jobs. The article even attributes some of Germany’s resilience to the difficult economic situation to its abundant use of robots. Compared to Britain (which has suffered a significant loss of jobs), Germany has 5 times as many robots for every 10 000 workers. Although the car industry has suffered greatly worldwide, Audi has been successful in introducing industrial robots alongside its workers.

While it seems that the increased use of robots could pave a way for new types of jobs such as the creation, maintenance and deployment of these machines, it’s critical that industry leaders prepare for these changes in ways that will benefit society: for example by considering how lower production costs could have a positive effect on employee wages.

This entry was posted in Robots and Society and tagged economy, working with robots. Bookmark the permalink.

3 Responses to Working With Robots