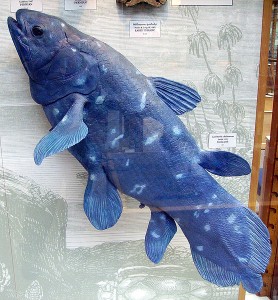 In 2001, Mitsubishi began the production of an artificial Coelacanth, an ancient species believed to be extinct  until the 1930′s.

The body of the artificial fish is partly made of silicone, plastic and elastic metal. The artificial fish achieves life-like movements through the use of an ¨elastic oscillating fin propulsion system,¨ technology originally developed for propeller-operated marine vehicles.  It is fully automated  and will swim to a recharging unit when its batteries run low!

The Coelacanth robot is currently on display at an aquarium in Tsuruga, Japan.  Since these species are extremely rare and live in very deep waters, this  artificial version provides viewers a realistic demo of a an animal that is truly a living fossil.

This entry was posted in Asia, Robots Around the World and tagged Coelacanth, living fossil. Bookmark the permalink.